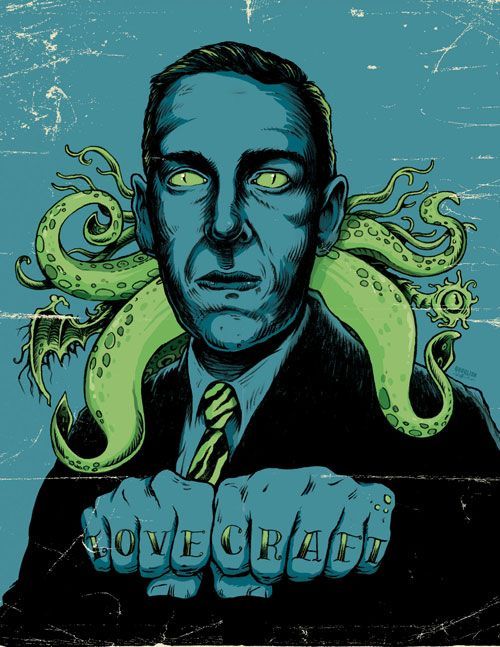 Howard Phillips Lovecraft is a recognized master of horror in Literature. His works are full of hints and references creating a gloomy atmosphere that encircles a reader with its tendrils. If you are not familiar with Lovecraftt's works, we strongly recommend you to read them. And if you read his stories and tales, you can easily pass our test.

Which one is Lovecraft's work?

All these works are good in their own way and frighten the reader. But only the Mountains of Madness story was written by Lovecraft.

The Fall of the House of Usher

The picture shows one of the monsters concocted by Lovecraft, and it is:

There can be no mistake: it has a huge size, wings, tentacles, the sea around it - it is great and terrible Cthulhu.

Only one of these images can protect a person's mind against the inconceivable power of creatures from other dimensions.

Augustus Derlet, Lovecraft’s friend and follower, concocted this form of the Sign of the Ancients. However, just this sign became canonical one for the Lovecraft’s universe.

With what space object does Lovecraft associate his gloomy world of the Yuggoth?

Pluto is quite far from the Sun, it is always dark and cold. Perhaps, that is why Lovecraft placed the mysterious and gloomy world of the Yuggoth on the edge of the solar system.

Cthulhu slept in a place hidden from people for thousands of years, it is called:

The impossible geometry of the city of R'lyeh puts the fear into hearts of people. It is immersed to the sea floor and will rise when the stars will take their desired position in the sky.

Lovecraft concocted a book that earns a cult following among all horror lovers. It describes the most sinister creatures and the darkest rituals of antiquity. It is called:

Necronomicon has never existed in reality. Maybe it's better.

Book of the Dead

Note of the Death

Notes from the House of the Dead

Who wrote the damned Necronomicon?

Those who went with the Necronomicon always ended badly. Moreover, Alhazred was no exception. An invisible monster captured and carried away him in broad daylight within sight of many bystanders petrified horror.

What is a trouble spot of heroes of the 'The Colour Out of Space' story?

A stone that fell from the sky infected soils around the Naham Gardner’s farm made it as a Cursed Wasteland.

The Necronomicon copies is housed in the occult library in what fictinal city?

The Miskatonic University sponsored an expedition to the Mountains of Madness. It is called in honor of the river of the same name, on which bank it is located.

On what continent are the Mountains of Madness, to which the scientific team of geology professor William Dyer went?

The Mountains rise above the eternal ice of Antarctica to tens of thousands of meters and close hell and brimstone from the human gaze.

Choose the correct name of the Messenger of the Gods who has thousands of forms.

Nyarlathotep is known as the Crawling Chaos. He can easily come to our world compared to other Ancients.

Where was the Haunter of the Dark imprisoned who drove wretched Robert Blake crazy?

The spire was visible from Blake's office window. Little by little, it captured the writer’s attention.

In sewers under the old city

In the dilapidated castle

In the old lighthouse on the ocean bank

In the spire of an abandoned gothic church

Cultists chant this mantra to awaken the sleeping Cthulhu. It translates as follows: ‘In his house at R'lyeh, dead Cthulu waits dreaming’.

What? I do not know Rumanian

You know something about the Lovecraft's characters only due to memes on the Internet.

You will understand what the matter is, if one day you will see in your dreams a place at the bottom of the sea, which geometry cannot be imagined, or you will want to get in a small town of Innsmouth.

It seems you know far too much. Just in case, draw the Sign of the Ancients on the door.

Popular quizzes
Cooking Game - Identify The Dishes by Their Ingredients

Jei
Do You Have What it Takes to be a Teacher?

Lee
Interactive Online Spy Test - Could You Be a Spy?

Sergio123
Interesting Facts About The Australia

Erich84
Can You Name These Fast Food Chain Logos and Mascots?

SamLock
How Well Do You Know Religions?