What Do You Know About the Gods of Ancient Greece? 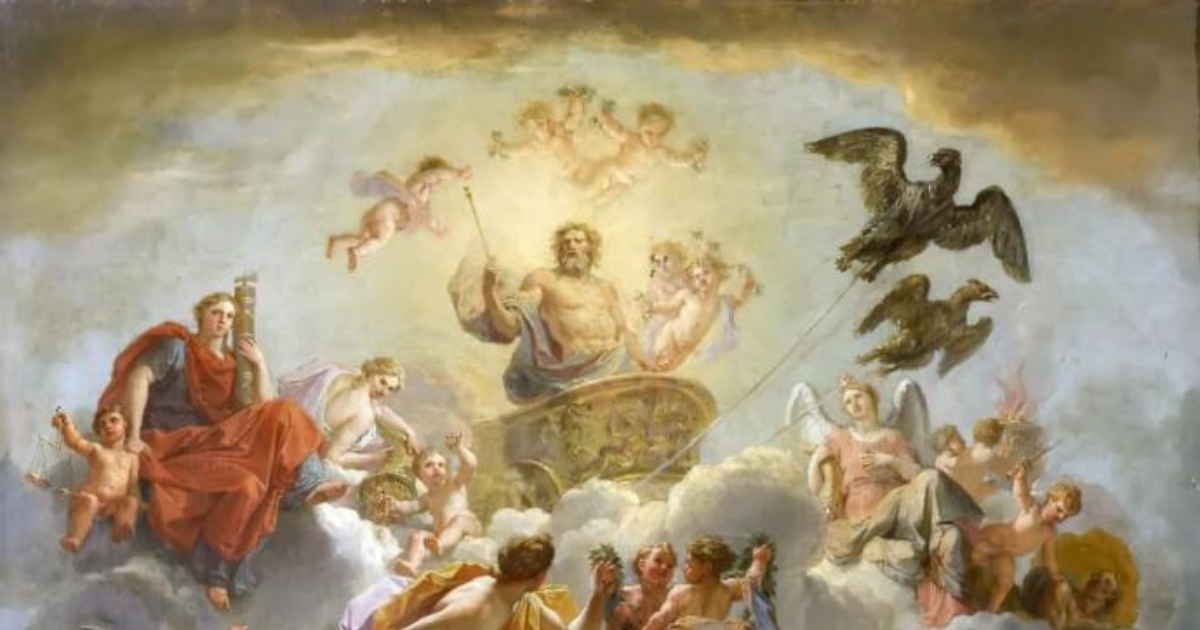 In Ancient Greece, each act of nature was explained by a deed of one or another deity. From dawn to the violent storm - the citizens of Olympus were responsible for all. Thanks to literature many Greek myths survived to this date. How well do you know them?

Zeus was at the head of the pantheon – a god of wisdom, thunder and lightning. A hard-boiled, strong willed character. Which of the following stories about him is true?

Zeus’ parents, Cronus and Rhea, had six children. Cronus ate five children after they were born, but Rhea hid the last one – Zeus, having deceived Cronus. When Zeus became an adult, he made Cronus to belch out a stone and then his brothers and sisters in the reverse order of swallowing. In some versions of myths Cronus took an emetic drug to do it, and according to others – Zeus cut father’s stomach open.

Where did the expression Pandora's box come from?

Zeus sent beautiful Pandora to punish people, for whom Prometheus stole fire. There were diseases and disasters in a box, which she brought and opened.

This is one of the plots of Classical Greek mythology, which means that the owner of the box gets unprecedented force and power

This is one of myths, which reads that the box was filled with diseases and disasters

This is from movies, have no idea how does Ancient Greece come into the picture

Goddesses are special characters of Classical Greek mythology. They’re beautiful and dominant. Everyone knows their names. But do you know what they mean? Let’s start, Aphrodite is a goddess of beauty, Hera – a goddess of marriage and the family, Demeter – a goddess of agriculture. What does Athena represent?

We know Athena as a goddess of wisdom. A goddess of justice is Themis. War is a man case after all, Ares was a war-god.

Athena - a goddess of war

Athena - a goddess of justice

Athena - a goddess of wisdom

Among the Olympus citizens there was a god whom his mother threw off the cliff at birth. What was his name?

Hephaestus, a god of fire and protector of blacksmiths, was born weak and sickish. His mother Hera couldn’t accept it and threw him off Olympus into the sea, but boy didn’t die, sea goddess Thetis gave him a home. Hephaestus bore malice towards his mother and brooded over schemes of vengeance. What schemes? We’ll know in the next question.

Hephaestus - a god of fire and protector of blacksmiths

Dionysus - a god of winemaking

Hermes - a god of trade and eloquence

How did Hephaestus revenge his mother upon betrayal and almost murder?

Hephaestus forged a strikingly beautiful gold throne and sent the gift to his mother. When delighted Hera sat on it, she became enchained by invisible bonds

Hephaestus forged an iron belt, which appeared to be a trap

Hephaestus forged a gold throne for his mother, which appeared to be a trap

Hephaestus forged a trident, using which he stabbed his mother

Correct answer is Nemesis. Nika is known as a winged goddess of victory. Later the sculpture of this goddess was carried to Rome and named by Latin name Victoria. Persephone is a goddess of fertility.

Perseus is a son of Zeus and ordinary mortal Danae. It is he who cut off the head of dreadful Medusa Gorgon, who turned everybody who looked at her into a stone. Some additional things helped him to do it. What didn’t he use?

Chain armor didn’t come into play in this hard case. Athena taught him to differentiate Medusa from other Gorgons and gave him a shield to make Perseus look at her reflection. Hermes gave Perseus an adamantine sword with which he cut off the Gorgon’s head, and Perseus himself took winged sandals, helm of invisibility and magic bag from Stygian nymphs.

What punishment did Prometheus suffer for his disobedience before Zeus? Let us recall, he gave fire to people secretly from gods.

One of the most famous myths. Every day an eagle pecked Prometheus’ liver, every night it grew back and it continued until Heracles shot the eagle from his bow.

Zeus condemned him to never-ending wandering in the dark

What plant, according to Greek myths, was created because of a quarrel between Hades and Persephone – a husband and a wife?

One day Hades fell in love with nymph Mint. When Persephone found it out, she turned her into a fragrant plant in a flurry of jealousy.

Sea creatures in Ancient Greece and Rome were often depicted on hippocamps-drawn chariots. Particularly, hippocamps were harnessed in the Greek god of seas Poseidon’s chariots.

Monsters, which live in Styx river

Giant birds with sharp as a dagger feathers

A goddess depicted as a beautiful naked woman coming from the foam of the sea, Who is meant here?

Aphrodite was the embodiment of femininity and purity, besides, she was a goddess of love. That’s why she was depicted this way.

Besides gods there are other characters of mythology, for example, spirits and magical creatures. Who are “goat hoofed forest demons. Like to drink wine and romps, that’s why they always hunt for nymphs. Dionysus’ and Pan’s companions”?

Centaurs are demons of mountains and forests with the upper body of a human, but below the waist they have the body of a horse. They’re known for a vehement, uncontrollable temperament. Horaes are goddesses of parts of the day, times of year and periods of human life.

Chimera – in Greek mytholody, a monster with the head and the neck of a lion, the body of a goat and the snake tail. However, it is named in honor of one animal, translated from Greek. What is it?

Nevertheless body is the basis. Apparently, for this reason this monster was titled Chimera.

The most handsome god of Olympus is Apollo. He was incredibly honored in Greece, because he was a patron of the arts, muses and medical treatment. He’s a great archer and a masterful musician. Where is Apollo depicted?

How many main gods lived on Olympus?

The main citizens of Olympus in ancient Greek mythology were the following 12 characters: Zeus, Hera, Ares, Athena, Artemis, Apollo, Aphrodite, Hephaestus, Demeter, Hestia, Hermes, and Dionysus. Zeus’ brothers - Poseidon and Hades are also considered main gods, but they didn’t live on Olympus, that’s why they aren’t included in this list.

It seems you're from some other epoch

It seems you know about Gods as much as the citizens of Hades' kingdom. Apparently, you're a dark horse in Greek mythology or you didn't make every effort. In any case, don't worry. Refresh your knowledge and pass the quiz once again. The learning process will definitely absorb you. But don't lose your way in plots ;) Share this quiz with your friends, let's see how good they are at the legends of faraway times.

At the foot of Olympus

Studying mythology is an absorbing and interesting activity. Read about brave Herculean labours, punishment of Cronus, Hephaestus' brooding over schemes of vengeance and other exciting stories at loose hours. And then come back to check new knowledge ;) Share this quiz with your friends, let's see how good they are at the legends of faraway times.

On the way toward Olympus

It's easy to get lost in these names and plots. But it's hard to mislead you. You can tell the difference between Athena and Aphrodite and you know famous myths. A great set for a man of education. Share this quiz with your friends, let's see how good they are at the legends of faraway times.

It's impossible to put you off stride with cooked up facts and complicated stories. Greek mythology is very interesting, but sometimes it's the hell of a mess. How do you manage to remember so many plots and characters? An incredible result! Share this quiz with your friends, let's see how good they are at the legends of faraway times.

Jei
Interesting Facts About The Countries of Euroasia

Erich84
QUIZ: Am I a Perfectionist? Take our Personality Test to Find Out

Jackl1
What Art Career Is Right For Me?

Jackl1
How Many Kids Will You Have?