Do You Know Which Animal Has a Longer Life Span? 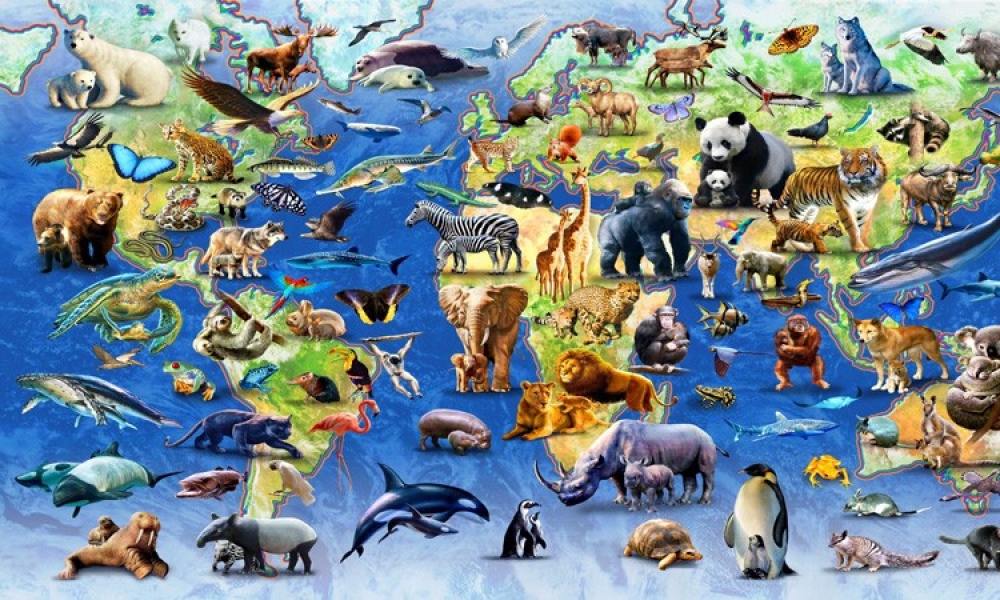 The world of animals is a magical universe full of secrets and amazing facts. Most of them we only see on TV or in zoos. What does the lifestyle of an animal depend on? Its size? Its diet? Or maybe the environment? Take this quiz to find out how well you know Earth's fauna! Read! Set! Go!
Let`s Start
Embed

What is the lifespan of the brown bear?

Brown bear is a forest animal. It is one of the largest living terrestrial animals, rivaled in size only by its closest relative, the polar bear. In Europe, brown bear inhabits mountain forests. In North America, it's commonly seen in open areas, such as tundra, Alpine meadows, or sea coasts. Despite its big size and clumsiness, the brown bear can run at the speed of 50 km/h. Plus, the brown bear is a great swimmer and can climb trees (although old bears do that less frequently than young ones). With the hit of a paw, the brown bear can break the spine of a wild boar, deer or elk. In captivity, brown bear lives about 45 years. In the wild, the average lifespan of this animal is 35 years.

City dwellers see pigeons in the streets every day. How long does the pigeon live?

In the wild, a rock dove (commonly reffered to as "pigeon") roosts and breeds on cliffs and rock ledges. Originally found wild in Europe, North Africa, and western Asia, pigeons have become established in cities around the world. Its domesticated form, the feral pigeon, has been widely introduced elsewhere, and is common, especially in cities, over much of the world. A rock pigeon's lifespan ranges from 3–5 years in the wild to 15 years in captivity, though longer-lived specimens have been reported.

What is the lifespan of a crayfish?

Crayfish breathe through feather-like gills. Some species are found in brooks and streams where there is running fresh water, while others thrive in swamps, ditches, and paddy fields. The first crayfish inhabited our planet 130,000,000 million years ago, during the Jurassic period. The average lifespan of a crayfish is 15-20 years. Crayfish meat is rich in proteins and therefore very nutritious. Eating crayfish on a regular basis does good to your heart and kidneys. Crawfish are low in fat and contain only trace amounts of carbohydrates. Plus, crawfish are high in B vitamins and minerals such as calcium, magnesium, iron, zinc and phosphorous.

Here is a tricky question! Do you know how long ants live?

Ants are traditionally considered hard-working and patient creatures. Ants create their own civilization with a rigid hierarchy, clear distribution of responsibilities, and underground cities. Furthermore, ants are good at adapting to new conditions. They can survive in almost any environment! They can grow mushrooms and tend cattle. Can you imagine that? That being said, it's hardly surprising that the average lifespan of an ant is 15 years.

Everyone knows that the lion is the king of the animals. Do you know how long this magnificent animal "reigns"?

Lions played a huge part in the lives of our ancestors. In ancient times, people used to draw lions on stones and in caves. (Do you remember the Lascaux cave in France?). In medieval times, lion sculptures embellished churches, bridges, and important buildings. Lions were depicted on paintings, flags, and coats of arms. In the wild, lions live 10 to 14 years. In captivity, this animal can live for as long as 20 and even 30 years. In their natural habitat, male lions rarely reach the age of 10. Many lions are deadly injured in fights with other lions.

There is an opinion that if pikes reached more than 2 meters in length, they would pose a danger to humans. How long do you think pikes live?

Pike are found in sluggish streams and shallow, weedy places in lakes and reservoirs, as well as in cold, clear, rocky waters. They are typical ambush predators; they lie in wait for prey, holding perfectly still for long periods, and then exhibit remarkable acceleration as they strike. They inhabit any water body that contains fish, but suitable places for spawning are also essential. They seem to prefer water with less turbidity, but that is probably related to their dependence on the presence of vegetation and not to their being sight hunters. Pike are aggressive if not given enough space because they are territorial. They use a form of foraging known as sit-and-wait.

Giraffe are like the Eiffel tower among animals! What is the average lifespan of the giraffe?

Giraffe is the tallest among living terrestrial animals. Male giraffes reach 5.7 meters in height. Females are 0.7-1 m shorter than males. The tallest recorded male was 5.88 m and the tallest recorded female was 5.17 m. Male and female giraffes weight about 1930 and 1180 kg, respectively. Despite its long neck and legs, the giraffe's body is relatively short. In the wild, the giraffe lives about 25 years. In captivity, the animal can live up to 10 years longer.

What is the lifespan of the killer whale?

The killer whale is the largest member of the oceanic dolphin family. A typical killer whale distinctively bears a black back, white chest and sides, and a white patch above and behind the eye. Males typically range from 6 to 8 metres long and weigh in excess of 6 tonnes. Females are smaller, generally ranging from 5 to 7 m and weighing about 3 to 4 tonnes. The highest densities of killer whales is in the northeast Atlantic around the Norwegian coast, in the north Pacific along the Aleutian Islands. In the wild, the male killer whale lives 29 years, while the female lives up to 50 years.

Who doesn't like small and fluffy squirrels? How long do you think the red squirrel lives?

The red squirrel is known for its ability to hide nuts, berries, funghi, and seeds. Excess food is put into caches, either buried or in nooks or holes in trees, and eaten when food is scarce. However, squirrels have a poor memory and often forget where they have hidden food. Red squirrels occupy boreal, coniferous woods in northern Europe and Siberia. The active period for the red squirrel is in the morning and in the late afternoon and evening. It often rests in its nest in the middle of the day, avoiding the heat and the high visibility to birds of prey that are dangers during these hours. Red squirrels that survive their first winter have a life expectancy of 3 years. Individuals may reach 7 years of age, and 10 in captivity.

Have you ever thought of how long the dragonfly lives?

Adult dragonflies are characterized by large, multifaceted eyes, two pairs of strong, transparent wings, sometimes with coloured patches, and an elongated body. Dragonflies are agile fliers, while damselflies have a weaker, fluttery flight. Dragonflies are predators, both in their aquatic larval stage, when they are known as nymphs or naiads, and as adults. The life span of a dragonfly is as varied as its colors. Some species live as adults for weeks and some species live for several months.

How long does the porcupine live?

Porcupines are rodents with a coat of sharp spines, or quills, that protect against predators. They live in wooded areas and can climb trees, where some species spend their entire lives. Most porcupines are about 60–90 cm long, with an 20–25 cm long tail. In the wild, the lifespan of the porcupine is about 15 years. In captivity, the animal can live to reach 30 years.

The elephant is the heaviest terrestrial mammal. Such an animal must have a long life! Do you agree?

Due to its long lifespan, the elephant is the symbol of life. In many cultures, elephants represent strength, power, wisdom, longevity, stamina, leadership, sociability, nurturance and loyalty. Several cultural references emphasize the elephant's size and exotic uniqueness. For instance, a "white elephant" is a byword for something expensive, useless, and bizarre. Africa contains many rock paintings and engravings of the animals, especially in the Sahara and southern Africa. In China, riding an elephant in your sleep is a good sign. In the wild, the elephant usually lives 60—70 years. In captivity, their lifespan reaches 80 years. Adult elephants don't have enemies, except for humans.

It looks like You grew up in the desert:) The few animals that You met, ran away and You have not been able to determine their life cycle. You know exactly how long a camel lives, but this knowledge is not useful to You today. But do not be upset! The magical world of amazing animals is fraught with a lot of incredible and You will find an ocean of discoveries.

You can be proud of your knowledge. You must watch lots of documentaries on Animal Planet and spend all your free time travelling the world. Good for you! However, there are some things you don't know. Maybe its's time to embark on another expedition? Get you bags and off you go!

It's incredible! Are you the same old man who saved the animals from the Flood? You seem to know the fauna of our planet like the back of you hand! How do you do that? Is that knowledge or gut feeling? Spill your secrets! Anyway, cudos to you for being so intelligent and well-read!

Popular quizzes
Which Temperament Do I Have?

Jei
How Well Do You Know Riyaz Aly?

Margarite
Which Communication Style Do You Have?

LilyP
How Much You Know About Chinese Cuisine? Try this quiz!