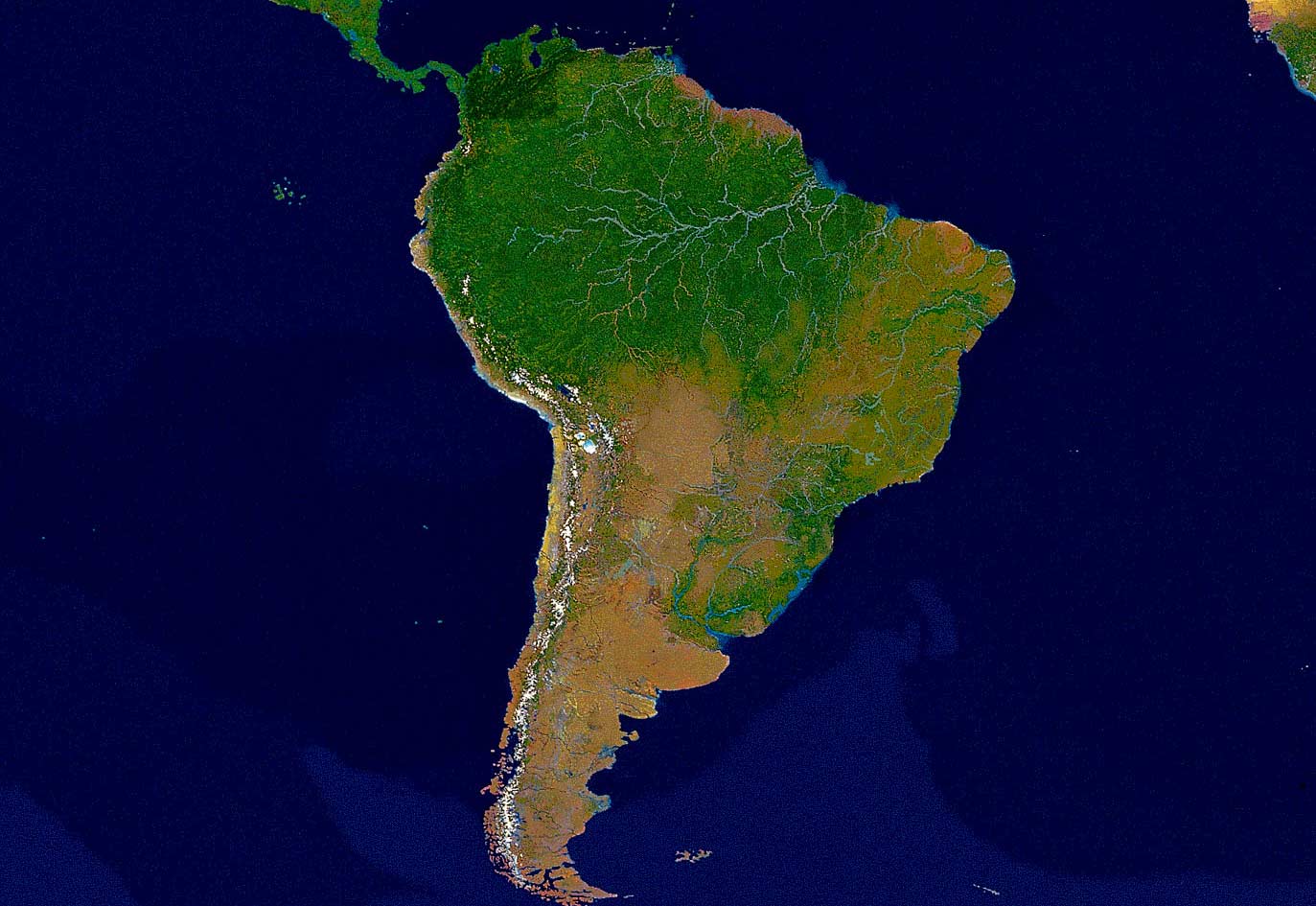 When hearing the words "South America", most people think about the rainforest and the Amazon River. As you might know, the Amazon basin is the largest drainage basin in the world. Which country is comparable in size to the Amazon basin?

Let's continue talking about water. Venezuela is known for a waterfall called Angel Falls on the Churun River. Which record does this spectacular waterfall hold?

The waterfall is 1,054 meters high. According to some sources, its height is only 99 meters. Angel Falls got its name from a pilot James Angel who flew over the waterfall in 1933. The largest waterfall system Iguazu Falls is also located in South America, at the border of Brazil and Argentina. During the rain season, Iguazu Falls carries as much as 13,000 m3 per second. On June 9, 2014, the waterfall hit the record by carrying 45,700 m3 per second. Victoria Falls is the widest waterfall in the world. It's 1708 meters wide. At the same time, it's only 108 meters high. Victoria Falls is located in southern Africa on the Zambezi River at the border of Zambia and Zimbabwe. The Niagara Falls in North America holds the record for the biggest flow rate. Each second, it carries 6,000 tons of water. It's curious to know that the name of this waterfall translates as "roaring water." Its noise can be heard at the distance of 25 km.

Since the bigger part of South America is located in the equatorial latitudes, it holds the record for...

Due to its location in the equatorial latitudes, South America is the rainiest continent. It is so rainy because of the humid air coming in from the oceans. For example, on the Pacific slope of the Western Andes, the average annual rainfall is so big that the water could cover our entire planet 15 m deep!

The Atacama desert in South America is one of the driest places in the world. In the territory of which country is the desert located?

The Atacama desert is located in the northern part of Chile. There, it only rains once or twice in a century. In some regions of the desert, there has never been any rain. Can you imagine that?

The Andes form a continuous highland along the western edge of South America. Which world record does this mountain range hold?

Compared to other continents, South America has the largest deposit of which mineral product?

Chile is known for the world's largest deposits of copper. It accounts for almost 20% of global copper production.

TLa Paz, which is the capital of Bolivia, is located in a canyon created by the Choqueyapu River, in the crater of an ancient volcano. Which record does this city hold?

Along with Tristan da Cunha archipelago, this island is the most remote inhabited island in the world.

In 2004, in Argentina, a new dancing record was added to the Guinness Book of World Records. As many as 269 couples performed this dance at the same time, hitting the 1973 record with 173 participant couples. Which dance was that?

Argentine tango originated at the end of the 19th century in the suburbs of Buenos Aires and Montevideo. Originally, it was the dance of poor people. Years later, tango grew popular in Paris and then conquered the entire world.

As we found out earlier, Chile has the world's largests deposits of copper. It's also known for the Atacama desert and Easter Island. Plus, Chile is the only highland country that has no...

Chimborazo is a picturesque volcano in Ecuador. What is it famous for?

It's the world's highest volcano

Its crater is home to migratory birds

Well, you can do better... Or maybe you were too nervous and couldn't concentrate? Anyway, now you know the most jaw-dropping records of Souh America. We bet you're dreaming of traveling to this wonderful continent. What are you waiting for? Get your things and embark on the most amazing journey of your life!

Wow! You can be called an expert on South America! You know its rivers, volcanos, cities, mountain ranges, and many more. You must have ready lots of books and watched countless documentaries on this mysterious continent. Continue to polish your knowledge! South America holds more secrets than you think! Keep your eyes peeled for wonders!

Is there anything you don't know about South America? Landscape, nature, flora, fauna, art...You seem to know this exotic continent from A to Z. Maybe you're destined to live in South America? What do you think? It's time to pack your bags!

ilon
Quiz: Are You a Well-Read Person?

Lee
How Well Do You Know Vincent Van Gogh? Let's Find Out!

Lee
Am I Sociable? The Quiz Will Find Out

Lee
Are You Neurotic? This Quiz Will Find Out

Jackl1
How Sharp Is Your Short-Term Memory?