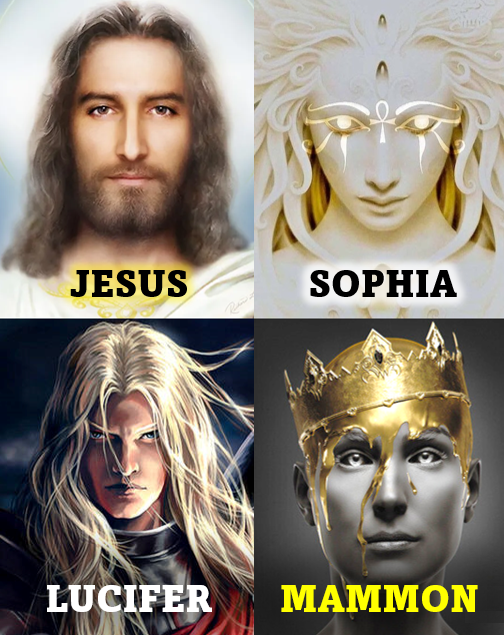 Which God are you influenced by?

What is most attractive to you?

Working my way up in a company

Developing my skills to their peak

Being able to fully understand the things I study

Having an exciting goal to progress towards

Who do you trust the most?

"A good reputation is one of the top three most important things."

"It's okay to cut corners if one can get a benefit from it."

"I am willing to suffer for a good cause."

"Abandoning one's beliefs is a sign of a lack of character."

Seek an understanding of the big picture

Do a cost/benefit analysis of the best path forward

Have confidence in myself and take decisive action

Try to become well connected with people that can help me

"Those who work harder or smarter than others deserve more."

"It is immoral to talk bad about one's tribe."

Those with opposing beliefs are _____

often resentful, made bad choices, or had a bad childhood

often well-intentioned, but just confused or inconsistent with their values

often trying to seek ways to control others with their views

When evaluating information, I usually ______

Check to see if the sources are biased against me

Check against my most trusted sources

Check the ability of the information to make accurate predictions

"In the last year, I have changed my mind on at least one significant issue after investigating the evidence."

"Embellishing and exaggerating are more powerful than the plain old truth."

"A rigorous analysis of the stock market will never beat the ability to get insider information."

Sophia was the Goddess of Wisdom, the most ancient of Gods.  She was the mother of all things, delivering energy into existence.  As the mother of all Gods, she reigns supreme.  She was epistemically insightful with her all-seeing eye that allows here to simultaneously comprehend the possibilities within all possible worlds across all time.  She was morally insightful by seeing forward into the future and knowing that the joys produced by existence would be worth the suffering entailed therein.  Those under the influence of Sophia are likely to have a big picture view of reality.  They are likely looking for the long-term best strategy for humanity.  These people are on the path of uniting truth with goodness, so that they can be accurate in their attempts to make the world a better place.   The benefits of the influence of Sophia are peace, understanding, patience, long-suffering, insight, and a deep love for all things.  Sophia is constantly motivating life towards greater spheres of connection, harmony, unity, and love.  Those under the influence of Sophia may struggle with short-term obstacles, but wisdom will guide them to the best long-term result.     ANSWER SHEET FOR QUIZ - https://transcendentphilos.wixsite.com/website/forum/transcendent-mythology/quiz-which-god-are-you-influenced-by   FOLLOW TRANSCENDENT PHILOSOPHY FOR MORE CONTENT:   https://www.facebook.com/transcendentphilosophy

Jesus was the God of Love who taught forgiveness and acceptance.  He emphasized faith, humility, and self-mastery.  He was eventually killed by those jealous of him.  Jesus was morally insightful by realizing that certain moral principles made life better for everyone.  Jesus was epistemically foolish in promoting faith in miracles instead of encouraging the importance of rational evidence.People who are under the influence of Jesus are likely to have a love for humanity and goodness.  The problem is that they might choose faith over better methods of discovering truth.  These biases towards faith can permeate their perspectives on a variety of issues.  Perhaps noticing this bias can make them more aware of it so they can choose whether or not they want to maintain this bias.  The benefits of the path of Jesus may include life-transcending meaning and purpose, the development of personal virtues, revenge-transcending forgiveness, service, charity work, hope, and connection.  The path of Jesus strengthens the moral value we find in all individuals, promoting justice for all.     ANSWER SHEET FOR QUIZ - https://transcendentphilos.wixsite.com/website/forum/transcendent-mythology/quiz-which-god-are-you-influenced-by   FOLLOW TRANSCENDENT PHILOSOPHY FOR MORE CONTENT:   https://www.facebook.com/transcendentphilosophy

Mammon, the Goddess of Greed, was always chasing after wealth.  She sold her soul to the devil in exchange for all the wealth of hell.  Now she rules over those who sacrifice their principles for money.  Mammon was epistemically insightful by discovering all the ways to maximize wealth.  She was epistemically foolish for thinking that it would be worth it.It is likely the case that many people have a weakness for Mammon's temptations, but not all fully succumb to the seduction of her powers. Perhaps many people have noble reasons for their pursuit of money, or their other Mammon-oriented biases.  But perhaps these people would do well to notice the slight biases they have towards the Mammon end of the spectrum and make sure they are comfortable with their justifications for this mentality.   The benefits of the path of Mammon might be the ability to provide useful services and helpful products that make the world a better place, the creativity to innovate in ways that change the world, the laser-sharp focus to accomplish the goals one deems worthy of pursuing, and the benefits of generating mutually self-interested cooperation.   ANSWER SHEET FOR QUIZ - https://transcendentphilos.wixsite.com/website/forum/transcendent-mythology/quiz-which-god-are-you-influenced-by   FOLLOW TRANSCENDENT PHILOSOPHY FOR MORE CONTENT:   https://www.facebook.com/transcendentphilosophy

Lucifer, the Angel of Light, was jealous of God's power and rebelled against heaven.  His lust and greed for advancement led to his downfall, becoming the God of Power.  He was morally foolish to decide that rebellion was a good thing.  He was epistemically foolish when he failed to accurately measure his abilities relative to God's.  Those who are tempted by Lucifer are likely to desire power, authority, and status.  They are likely to suspect that others are chasing after influence and glory as well.  These biases can lead to messy political conflict.  The desire for power seems to give short-term benefits, but isn't necessarily the most reliable long-term strategy, as those who lust for power will likely be wanting to end your rule.  Noticing these biases can help someone reevaluate whether or not this path is best for them. The benefits of the path of Lucifer might be successful navigation of complex social situations, the ability to protect oneself and loved ones from the schemes of those who are against you, the ability to gain power and make the world a better place with that power, the ability to amass resources to put to use in the ways you believe are beneficial, and the courage to rebel against authority that you deem immoral.     ANSWER SHEET FOR QUIZ - https://transcendentphilos.wixsite.com/website/forum/transcendent-mythology/quiz-which-god-are-you-influenced-by   FOLLOW TRANSCENDENT PHILOSOPHY FOR MORE CONTENT:   https://www.facebook.com/transcendentphilosophy